May 15, 2020
It's been a while. I changed jobs and routines, and I have less free time in general these days. And the whole pandemic thing has really left me feeling weird and unsure what to blog about. But I do have a story to tell. I had been scheduled for a regular colonoscopy as a checkup on my crohn's disease. Originally it was going to be in March, and then the whole world stopped. It got pushed a couple more times until the final date was this last week. I was originally going to go alone, but Katie decided to have us all go as a family. I felt a little irresponsible about having us all go, given the current recommendations against traveling out of state, but it also gave us the chance to bring home an old pickup truck my dad was giving us. They had been trying to get it to us since March. Everything went fine on the trip, and we were heading home. I was in the truck, and Katie was in the van with the kids. We stopped at a gas station near the Utah/Idaho border for a bathroom bre
2 comments
Read more

January 21, 2020
I've been meaning to post this since the year ended. But it was the best running year I've ever had, at least in some ways. 1,183 miles—a new personal record, or an average of 3.2 miles per day 23 runs of a half marathon or longer 1 marathon 3 pairs of shoes 126,665 calories burned I also walked a little under 400 miles (as exercise, not just daily steps). I think that means the knee surgery was a huge success. Now I just hope it holds up; I know some people have had improvements only for the scar cartilage to wear out after a year or two. But even if this was my last chance to run as much as I want to, it was really nice.
1 comment
Read more

January 07, 2020
On New Year's Day as it got near bedtime, I noticed something. Or, rather, a lack of something. Cinder had been in the house most of the day, as had the other cats, since it was cold and snowy. But whereas Dortmunder and Vin tend to spend a lot of time napping in closets or under furniture, Cinder always lets us know where he is. He flops down on the floor where we are constantly walking from kitchen to living room, or is curled up on the couch for hours at a time where the kids like to sit. The point is, it's never a mystery where he has gotten himself off to. So we looked around and concluded that he was not in the house after all. I went outside with a flashlight and found kitty prints going toward the neighbors' yard, but they had shoveled a little later than I had, and I couldn't find any more tracks. The next day there were cat prints on our back porch, so during the night he had probably come to the door there wanting to be let in. I went out and followed the
Post a Comment
Read more

November 19, 2019
Well, it's been a minute. Things have been extraordinarily busy, and I've been hanging onto some news that I wasn't really ready to announce until things were official. But I'm changing jobs next month. We moved to Idaho for me to take a marketing communications job at a nutritional supplement company. And it's been great. I love the people I work with and enjoy what I do. But earlier this year I was contacted by a recruiter for the Idaho National Laboratory about writing for them. The INL is a huge complex that performs research into nuclear power and other areas of energy and national security. The have a site out in the desert an hour away that houses the Advanced Test Reactor, but I'll mostly be in town working with the people managing nuclear research programs. It's going to be a big adjustment, for two reasons. One is learning the technology itself, and I'm trying to research as much as I can before starting. The second reason is that working f
1 comment
Read more 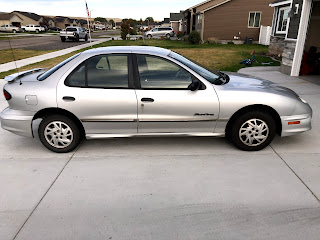 It's funny how attached we become to worldly possessions. That's the case with my car. This is a 2001 Pontiac Sunfire. Katie bought it when we had just started dating, in December 2003. She drove it for a few years until we got something bigger for her to take the kids around in, and this has been my commuter car for the last 10 years. So yeah, I've become attached to it. It's not much to look at, but it's been surprisingly reliable over the years. It's also got relatively low mileage for an 18-year-old vehicle (164,000). But all things must come to an end, and so it's time to bid farewell to this relic of our courtship. And like our courtship, I went through a while "shopping around" and then once I found the right vehicle it clicked immediately. I ended up getting a 2015 Nissan Rogue. It's significant to me because every car I had ever owned was a GM vehicle (2985 Chevrolet Celebrity, 1994 Chevrolet Corsica, 1999 Chevrolet Lumina, t
1 comment
Read more 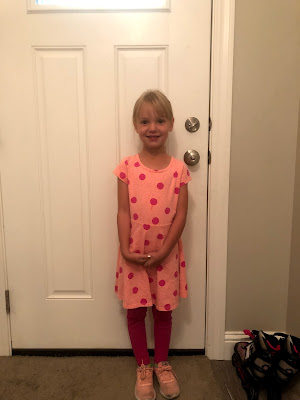 Clara started kindergarten this year. There's always something unique about sending your child off to school for the first time. There's a little relief, and a little sadness. And since Clara has always been our wild card, we weren't totally sure what to expect. She was really excited, though, and counting down the days. I don't really remember her expressing any fear about it, which seemed a little unusual. It's still the first week, but she's been goo about getting up early. As a side note, I swear our elementary school's 8:00 starting time is earlier than others. I think mine started at 9. And Clara has usually slept until past 9. So getting her up before 7 is a huge change. We'll see how it works out in the freezing winter months. Oddly, we requested afternoon kindergarten but didn't get it; in the past it's been no problem because more parents seem to want the morning schedule. Last week we had back to school night and met her teache
1 comment
Read more
More posts