Showing posts from October, 2018
Show all

October 18, 2018
According to the census data I found online regarding male life expectancy in the United States, today is exactly the halfway point of my life. So, as they say, it's all downhill from here!
2 comments
Read more 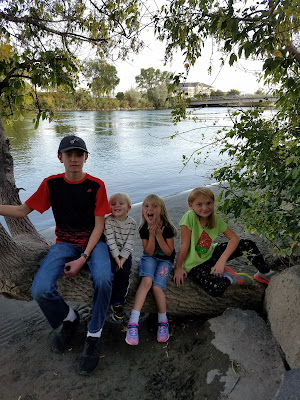 You guys, I have a teenager. That is really weird.

I feel like Samuel is a good kid to ease into the whole parenting teenagers thing. He's responsible and relatively level-headed. He has a desire to be obedient and is fiercely defensive of his family. And he recently switched from taekwondo to krav maga, so that defense is also literal.


He's not fond of being photographed right now, however, so you get to see him with his siblings. Happy birthday, Samuel. I honestly could not hope for a better son.

Last week I had the arthroscopic knee surgery that I had wanted to get for a while. It turns out I'm really close to my out-of-pocket insurance max this year, so the $10k operation should cost no more than $300. So it made sense.

It was interesting. I went to the hospital, they shaved part of my leg (a first for me), and then I was in and out within about an hour. I didn't get to talk to the doctor, so I'll have to wait for the follow-up next week to see what he has to say about how much damage there was.

The recovery has been... well, I have nothing to compare it to. I used crutches off and on for the first two days or so, but I was allowed to put weight on it even right after the surgery. It was just removing some damaged cartilage from the knee cap, rather than repairing a tendon or something major. That being said, it's been really swollen and pretty uncomfortable. Not much pain, though, and I decid…
Post a Comment
Read more

October 08, 2018
Sometimes it's fun to see little clues around in your daily life and try to paint a picture with them, Sherlock Holmes style. I had one such experience on Saturday while I was out for a run.

I often see beer cans or liquor bottles on the side of the road, and this day was no exception. There was the usual assortment of evidence of alcoholism. But among the brown weeds and grass, something red caught my eye. As I ran past, I could just make out what appeared to be lacy underwear. So I figured someone had an exciting night.

And I continued on. Then, about 2/3 of a mile further down the road, I saw what was unmistakably a pregnancy test. Ah, the plot thickens. That exciting night has consequences.

That was all for now. But in 9 months I'm going to make sure to run down the same road and see if there are any discarded diapers.
2 comments
Read more
More posts