Showing posts from November, 2009
Show all

November 30, 2009
You are entering the vicinity of an area adjacent to a location. The kind of place where there might be a monster, or some kind of weird mirror. These are just examples; it could also be something much better. Prepare to enter The Scary Door. That's from Futurama, in case anyone was wondering. It's a parody of The Twilight Zone. Seriously, though, we have a scary door in our house. It's the coat closet by the front door. It frequently opens on its own. One morning I was sitting alone in silence, eating breakfast before work, and I heard this creaking sound that nearly necessitated a change of pants. And it's even worse if you happen to be in the room when it happens, because you can see a sliver of darkness when it opens. Jibblie jibblie jibblie.
4 comments
Read more

Run Your Giblets Off

November 26, 2009
This morning, in an effort to work up an appetite for the big dinner, I participated in the Utah Human Race 5k with my friend Jacob. We were surprised at how many people were willing to show up on a 25-degree morning. There were some 3600 participants. Despite the crowd, we ended up doing pretty well. Even though the 21-minute mark continues to elude me, I have to feel pretty good about 22:15.
Post a Comment
Read more

November 25, 2009
If you were to hop in your car and drive at 65 mph to Proxima Centauri, the next star nearest to the sun, it would take over 43 million years. And I'm pretty sure there aren't any restroom facilities between here and there anyway.

Thanks to Jer for correcting my terrible, terrible math. Maybe 43 million years would give me enough time to master simple division.
3 comments
Read more

November 25, 2009
Sometimes I think I'm wired funny in terms of emotions. I don't tend to get emotional if something really bad happens, but if I break a shoelace or something I will get really frustrated.

Such was the case last night. I had ordered new glasses from Costco, and I was pretty excited because I hadn't had new frames since 2001. So for two weeks I waited for them to call. Then, on a whim I stopped by the optical counter last night when I was there for something else. They were in! I took them home and put them on (I had my contacts in, so I couldn't really check them out at the store). Right eye, check. Left eye—what in the world is this? The whole world is squished, like when you watch a video on the computer and the aspect ratio is messed up. And no, I didn't still have my contact in.

I checked the numbers on the order with those on the prescription I had given them and found that in one place they had entered -6 instead of -1 (the cylinder correction measurement, if yo…
Post a Comment
Read more

November 19, 2009
I have noticed that if I go to heat up my lunch at exactly noon, nobody is using the microwave. But if I go 10 minutes before or after that, it’s always busy. I am guessing everyone else thinks it’ll be really busy exactly at noon and tries to compensate.

It’s interesting when my thoughts are out of synch with everyone else’s. As it happens, that seems to be most of the time.
Post a Comment
Read more

November 17, 2009
In the winter I am always torn between a desire to save money on gas by scraping my windows and the desire to warm up my car for a few minutes before leaving for work. And the lazy side of me usually wins. But I can't hold a candle to the person who was in front of me, as far as laziness goes. Whoever it was had a hood on, so I don't know if it was a man of a woman. But this person had scraped only a small portion of the windshield directly in front of the driver, not even all the way to the rearview mirror.

Kudos to you , sir or madam. You have taken the laziness to a whole new level. It makes me want to give up even trying to be lazy.
1 comment
Read more 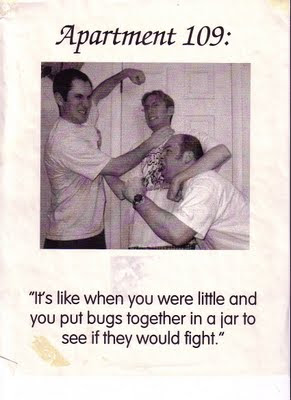 I usually catch spiders in a jar and put them outside, rather than kill them. But the other day I caught one I didn’t recognize and decided to look it up. It appears to be a hobo spider. Now, most people around here believe that a hobo spider is as dangerous as a brown recluse, but there is not any real scientific evidence to back it up. So I left it in the jar for a couple days while I tried to decide whether to release it or kill it.
In the meantime, a wolf spider was running across our kitchen floor last night, and I scooped it up into the same jar. And I’m a little ashamed to admit that part of me simply wanted to see how the two spiders reacted to each other.
Soon enough, the hobo spider killed the wolf spider, and I forgot about it for the rest of the evening. Then this morning all that remained of the wolf spider was some legs and a few bits of exoskeleton. So the hobo still may or may not be dangerous to humans, but it’s a pretty tough customer anyway.

November 09, 2009
Last Wednesday Katie and Sam got H1N1 vaccinations, so I stopped worrying about them (okay, it was mostly my parents who were worrying). They opened the Salt Lake Valley Health Department website for vaccination appointments, rather than have people wait in line all night. I managed to get their appointment before all the doses were spoken for after only 14 minutes.

Anyway, this afternoon Katie got a phone call from a friend we had over for dinner last night. She just found out she has a confirmed case, so she was certainly contagious yesterday (although she naturally wouldn't have come if she had been feeling sick). So I looked up some information about the vaccine. Apparently it takes about two weeks for your body to build up the antibodies in response to the vaccine. So things could get interesting around here in the "one to seven days" that apparently constitutes the incubation period.
Post a Comment
Read more

November 07, 2009
Once when I was young one of our cats had caught a bird (I think, but maybe it was a mouse) and did its thing for a while, until it went away and left the thing mostly dead. My dad put it out of its misery with a shovel and buried it. I remember being glad I wasn't the one who had to dispatch the poor creature.

Today it was our neighbor's prolific mouser who had been chasing a rat for a while in our backyard. I had to extract it from a window well and also get it out when it wedged itself under some boards (I wanted the cat to kill it, because I didn't want to have to do it myself and I didn't want this little disease vector roaming around the yard.) But in the end the cat left it mostly dead, so I had to mercifully decapitate and bury it. Fun.
2 comments
Read more

November 06, 2009
I hate dress shirts. And not for the reason most men do. Most men don't get the proper size collar and therefore feel like they're choking (or they just have fat necks). No, the reason I hate them is because the cuffs and collar always wear out way too soon. So if you're wearing a colored collared shirt (say that five times fast) it's all too soon that you start to see little points of white when there's plenty of wear left in the shirt itself. It's not a big deal if you're wearing it casually, but it just looks bad with a tie. Dress clothes should be dressy, after all. Does this mean we should go back to old-timey shirt collars? Having never worn one, I can't say. I have a feeling they were pretty uncomfortable. But surely the clothing makers could at least dye these shirts all the way through.
Post a Comment
Read more 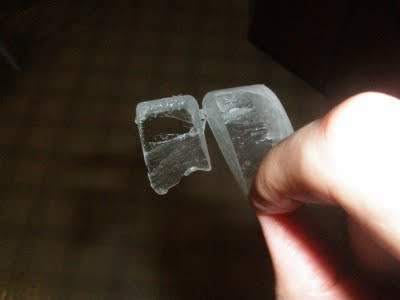 Our ice maker has been doing weird things. Tonight I noticed that the ice cubes are all hollow, and they've only been in there for a couple of days. As far as I can tell, there is nothing in the tray for them to form around. Aliens? Probably.
Post a Comment
Read more

Get off of My Lawn!

November 02, 2009
For the last few years it has become increasingly apparent that I am turning into an old person (i.e., anyone whose age no longer includes the suffix "-teen"), but last week I hit a new milestone. I saw some teenagers walking by the side of the road and was unable to determine whether they were wearing Halloween costumes or normally dress like that.