Showing posts from January, 2010
Show all

January 29, 2010
I was a horribly picky eater growing up. Spending a couple years in Korea helped; now I can eat anything, although many of my dislikes remain. If I had to pick one food I dislike most it would be onions. I will eat whatever if someone is feeding me, but on my own I will usually not eat them.

Now, however vehemently you may claim to not be picky, there is probably at least one food you strongly dislike. What is it?
7 comments
Read more

January 26, 2010
Today a coworker and I decided to go get some Chinese food. We were going to go to Panda Express, but we spied a buffet with lions out front. Thinking the lions were sure indicators of quality, we decided to go for it and dine at Buffet City.

At first glance, they really had a good variety of food. And there were certainly a lot of people there. (As a side note, it was cute from a purely linguistic perspective to hear the Chinese servers saying “gracias” to the Hispanic patrons.) So we loaded up some plates.

I started with some General Tso’s chicken, usually a good choice. Wow. Terrible. Not just not good; this ventured into the realm of “practical joke” bad. I wanted to look around for a camera. Thinking that bite was a fluke, I tried another and immediately wished I hadn’t.

Well, surely the fried rice would be better. Nope. It tasted like cardboard. And not the fancy stuff, either. This was like the cardboard you might find on the ground in an alley after it has been soaking in garbage…
4 comments
Read more

January 25, 2010
On Saturday I got to spend some time cleaning several more-or-less-public bathrooms. While that's never a terribly pleasant prospect, something occurred to me as I scrubbed those toilets. I think I'm a better person because of the janitorial work I have done (which, given my many less-desirable traits, makes you wonder how truly reprehensible I would be if I had never done any at all).

So I think everyone should have to spend time cleaning, and more than just your own home or room. In particular, teenagers should be forced to spend at least a few days cleaning up other people's messes. They might end up as more responsible adults.

I guess I'm officially entering that phase of life during which I complain about young people... There's no going back.
Post a Comment
Read more

January 24, 2010
Katie has been getting the series Bewitched from Netflix, and Sam occasionally watches episodes with her. Tonight they were watching an episode and, when something strange happened, Sam said, "Maybe it was Samantha's mother."

When a four-year-old can guess your plot line, you know you're not winning any awards for creativity.
Post a Comment
Read more

January 21, 2010
Today I was talking to my friend Todd and he mentioned someone who was complaining about something stupid. It occurred to me that some people are simply not capable of being satisfied with pretty much anything. I mean, growing up we probably all think our parents are like that, but some people seem to be like that in any situation.

So here's the question: Is it because they just have an urge to make things better (and if that's so, why don't they work on themselves first?), or is it some crazy mental illness? Do you have any examples?
1 comment
Read more 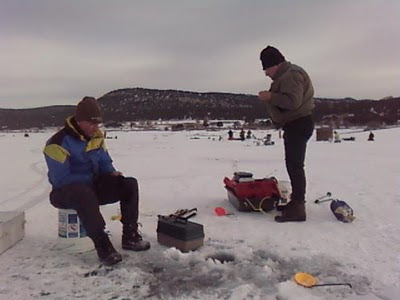 This morning I went ice fishing with my dad and my uncle. This is pretty much what it consists of:

It was actually a beautiful day for it, and eventually it warmed up to a tolerable temperature. There were a lot of other people fishing on the lake, and one crazy pilot somewhere in the area who flew a small plane over us at a height of about 50 feet.

My perfect record continues (that is, never having caught anything ice fishing). My dad eventually caught one after a couple hours, though. Naturally I forgot to take a picture.

Unexpected quotes from a four-year-old

The Revenge of the Billboard: The Offending

January 09, 2010
Now that I'm no longer heading home from the south in the evening, I don't get to see Doctor Heidi's tasteless billboard. Imagine my surprise, then, at finding a fresh, even more tacky billboard gracing the freeway on my new route.

This one entreats the insecure women of the world to "turn lemons into lemonade," complete with a couple suggestively placed lemons.

Trash of the Titans

January 07, 2010
I started a new job on Monday. It's been really enjoyable so far, despite the fact that I have a couple million things still to learn. The company has been expanding pretty quickly, especially given current economic realities, and therefore office space and supplies are at a premium.

It's funny to me how in an office environment people have sort of a primal instinct to scavenge, sort of like the kids in Lord of the Flies dressed up in Dockers. I remember seeing people leave a job; soon their empty cubicles were stripped bare of anything useful, not unlike a carcass in the desert (not that I would ever participate in such an activity, however nice that pen holder may be...).

At any rate, I now have a garbage can after four days.
1 comment
Read more 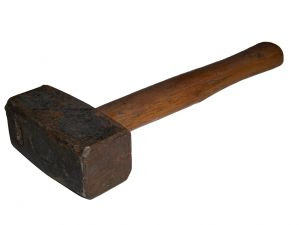 Can electronics go on strike? I mean, it's only a matter of time before robots get the vote. In the past few weeks, most of our remote controls have stopped working for one reason or another.

I fixed 'em, though.


Speaking of small electric-powered items, we have had 4 different hand mixers over the last 5 years. The gears turning the beaters keep getting stripped, because for some reason they are made of plastic. This last time we bought a Black & Decker. Maybe a company that makes tools can make a hand mixer that can take a little punishment.
1 comment
Read more
More posts